Tourism in Sharjah is one of the best places of tourism in the Emirates, as it was previously the capital of Arab culture and then the capital of Islamic culture in 2014.

Sharjah is considered an excellent tourist destination, especially for families and children, due to the diversity of tourist places in Sharjah, including many markets, museums, landscapes, entertainment places, and many more.

Many choose tourism in the UAE in search of fun, entertainment, and unique, enjoyable activities that they may not find.

When tourism in another country and the Emirate of Sharjah is one of the tourist cities, the government is characterized by its recreational parks and stunning landscapes that stimulate recreation and relaxation and bring peace to the soul. On top of it is Khalid Lake, one of the most popular tourist destinations in Sharjah. 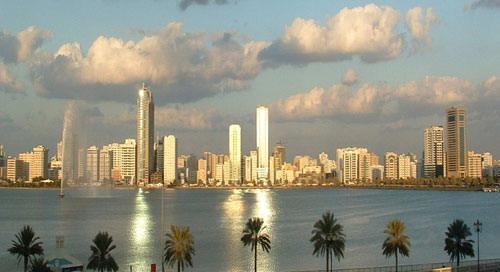 The best activities you can do on Khalid Lake.

• You can go hiking, jogging or cycling along the lake, where there are paths designated for many types of sports.

• You can also mesmerize sitting under the shade of a tree along the Corniche and enjoying the stunning green views facing the lake, as it is considered the most beautiful place to take memorial photos.

• You can also watch the dancing Khalid Lake Fountain, as the fountain’s length reaches 9 meters, which makes some fun shows.

• Along the Buhaira Corniche, there are also many cafes, in addition to many restaurants, where you can get snacks or lunch accompanied by the most beautiful view.

• The vicinity of Khalid Lake Sharjah includes many recreational facilities and entertainment suitable for children and adults, where you can take them and enjoy an exciting and lively day.

In Sharjah Aquarium, explore the amazing hidden world in the depths of the sea with its amazing creatures, as It reflects a vivid image of the diverse marine organisms that live in the local environment through many water basins filled with different types of aquatic life, making it one of the most important tourist destinations in the city of Sharjah.

The Sharjah Aquarium displays marine creatures, as it consists of two floors equipped with about 20 aquariums containing more than 150 species, including sharks, coral reefs, and moray fish. The Sharjah Aquarium also includes the Maritime Museum, the cafeteria, and many other facilities that provide its patrons with comfort. This and more in Sharjah, one of the most beautiful tourist cities in the Emirates.

You can see in this captivating world many amazing marine creatures in the Sharjah Aquarium and admire the magnificence of marine creatures of various sizes between the rocky beaches, coral reefs, and lakes among the wonderful mangroves.

Al Khan Street is one of the most important streets in the emirate due to its historical and touristic importance. Al Khan is considered one of the first inhabited areas in the Emirate of Sharjah, dating back 400 years now.

Activities you can do on Al Khan Street.

• Due to the historical importance of the street, the Khan includes many beautiful archaeological places that you can start visiting. Among these places are the Al Tawasha House, which was the seat of merchants’ meetings in the past, and Barzeh Al Khan, which served as a rest for travelers passing through Sharjah in the past and used to be their hospitality there.

• You can also pass the many mosques on Al-Khan Street, especially the ancient mosques whose foundations date back to earlier years. Among the most important archaeological mosques on the street is the Anas Bin Malik Mosque.

• Al-Khan Beach is the other place that the emirate and visitors resort to for entertainment and fun. You can enjoy a swim in the calm seawater or relax on the beach among the soft sands.

• Among the most important features of Al Khan Street that you can enjoy visiting is the Sharjah Aquarium, one of the most important museums in Sharjah, as it includes 250 different types of fish and marine organisms were brought from the seas of the Emirates.

• Finally, you can try the most important food in Sharjah through one of the restaurants spread on Al Khan Street, which is characterized by its traditional atmosphere that carries the heritage of the people of the country, and do not forget to try the wonderful local drinks.