Rama Meadows: The metaphors of beauty

The human race is very dark. He travels in the sea of ​​life connected with the chain of time and place. The speed of time is sometimes slow, and sometimes it starts running like a fast-moving train. I have traveled as much as the chain of legs allowed me to do. The rest of the day after returning from the trip is spent in travel memories. Returning to their environment, paying off new temperament and untying old knots, they pass at the same speed day and night. The artist of every age presents what he has lain or is laying. It’s not just about getting rid of memories, and people with nostalgia also look back on the journey ahead.

The night was spreading when he left the tomb lying on the road after crossing Deosai. Next was Astor. If you travel from Chilam to Astor Road, there are evergreen pine forests on both sides of the road. The road is usually the same as in a mountainous area: it eats bill, rugged and small towns, passing through bazaars and the canal that flows from Deosai on the left-hand side.

The man settled settlements by the water. Find a way to get to and from the river. Somewhere in these deserts, greenery and population can be seen around a mountain stream, but a little further, the world is the same. Raising his head like a wall, his chest touched the sky. There were completely bare mountains, and somewhere in them, there was a bare mountain. The road south of Killer Mountain was bad. There was a light landslide. The road was still deserted, with occasional sightings of people carrying something on their heads or sheep and goats whose shepherds were nowhere to be seen. My driver used to say, “Sir, sheep, and goats are very cheap here, one of four or five thousand. They see that fifty thousand rupees are going.”
Taking a turn from this road, the path leads to Rtu. If you walk straight, you come to Astor. Thus, the name of the whole area is Astor District, but Astor is also a city and the capital of this district. If we look at the history of Astor, Ghazi Makhpun, who was a mountaineer, traveled from Persia to this region. She was married to the royal family of Skardu. The princess gave birth to four children, who became Skardu, Astor, Rondo, and Khurramang.

When you reach Astor city, you can see a lot of activity in the bazaar. Seeing so much hustle and bustle makes you feel like you have come out to a crowded bazaar in Peshawar. The noise of jeeps, along with the noise of barbers, carpenters, grocers, greengrocers, hoteliers, and peddlers, makes the atmosphere of Astor wired, but this bazaar becomes as quiet after dusk as it is here. Did not exist. Passing through the bazaar, a road leads to the village of Rama. After the village, there is a beautiful Rama field called Rama Meadow.
Suppose there is an open green field in front of you. In that case, there is ice milky water flowing in the form of drains in the field, there are sheep, cows grazing in the field on the banks of the water, there are tall lush pine trees around, the field In the background there is a pine forest perched on a hillside and above it is the snow-capped peak of Chongra, with the peak is the southern wall of Nanga Parbat. Reflect a mirror and let it shine everywhere, then you are definitely in Rama Meadow. 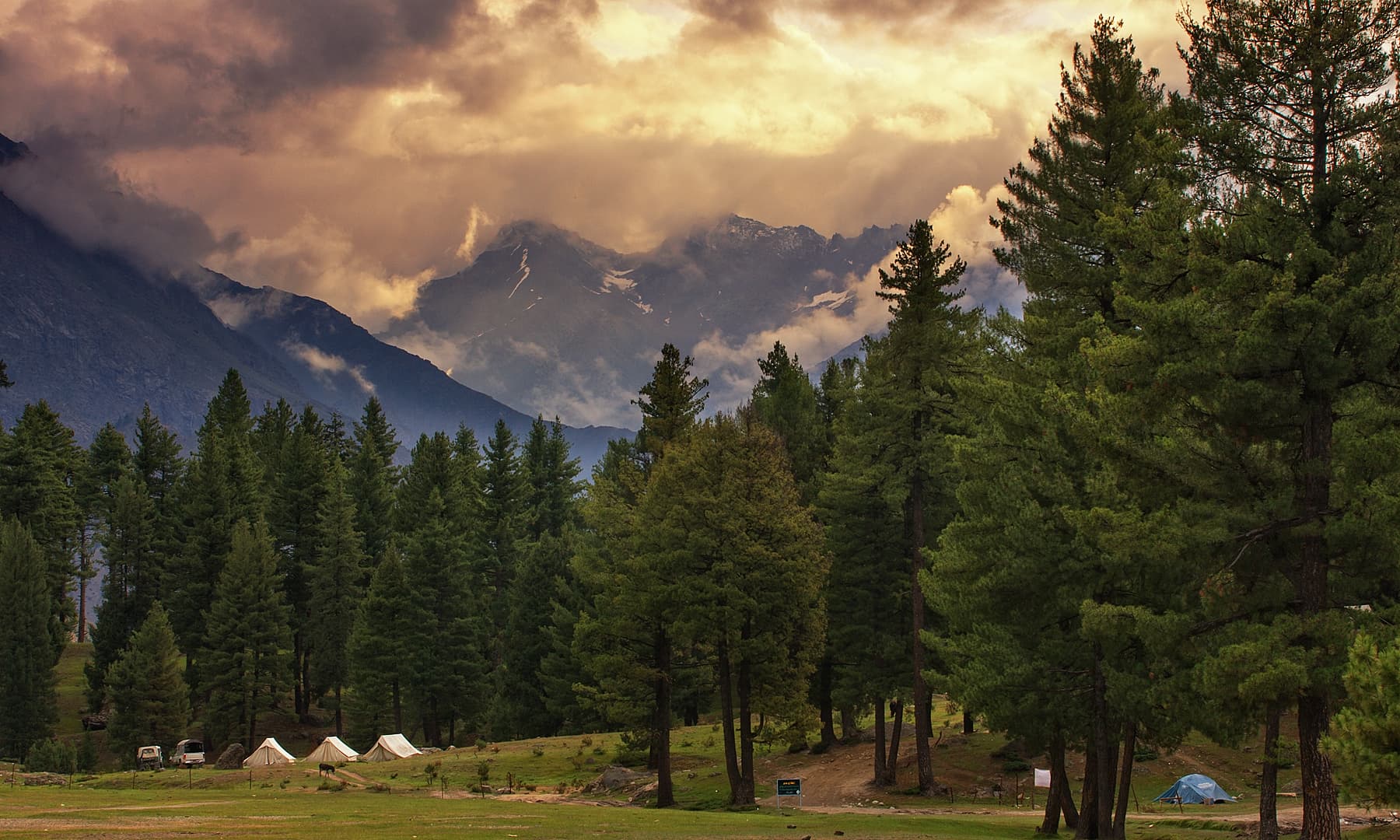 Rama village is on the way to Meadow. Eleven kilometers from Astor, this village is one of the most beautiful villages in the north. The forested road from Astor leads up here. The distance is not so much, but the climb is so long that it takes more than an hour for the jeep to cover this distance. The village of Rama, where potato fields thrive, has houses and fields and wooden huts. Working women working in the fields, and their colorful ankles waving in the air, fragrant atmosphere, happy faces, cheering children, swinging trees, winding roads, flowing water are the hallmarks of Rama village.

A jeep road from Rama Meadow with PTDC Motel leads to Lake Rama. You may reject this lake for the first time, but the way to get here is charming considering the top of Nanga Parbat. At the same time, there is a forest on one side, and on the other side, there are deep ditches in which water from a drain can be seen flowing somewhere below.
One summer afternoon, Rama was sitting on a chair under a tree on the lawn of the Forest Department’s rest house at the beginning of the Meadow, looking at the field, the forest, and Nanga Parbat. Even in the heat, it felt cold, the sun was setting, the evening stars came out as we watched, and after a while, the moon rose. I put on my jacket, held the watchman’s lantern, and went down to the field.
There was no one in Rama Meadow except the dim lights of PTDC and a couple of people. He jumped over the water channel and took some photographs, and wandered till midnight. What was the news then that this night will be very memorable. I have many nights to remember. Every night when I see the North Star lying on the roof, I remember something. Whether it is a lantern, Rama’s field, and the moon rests on Nanga Parbat. There is such peace that it makes one want to die there. 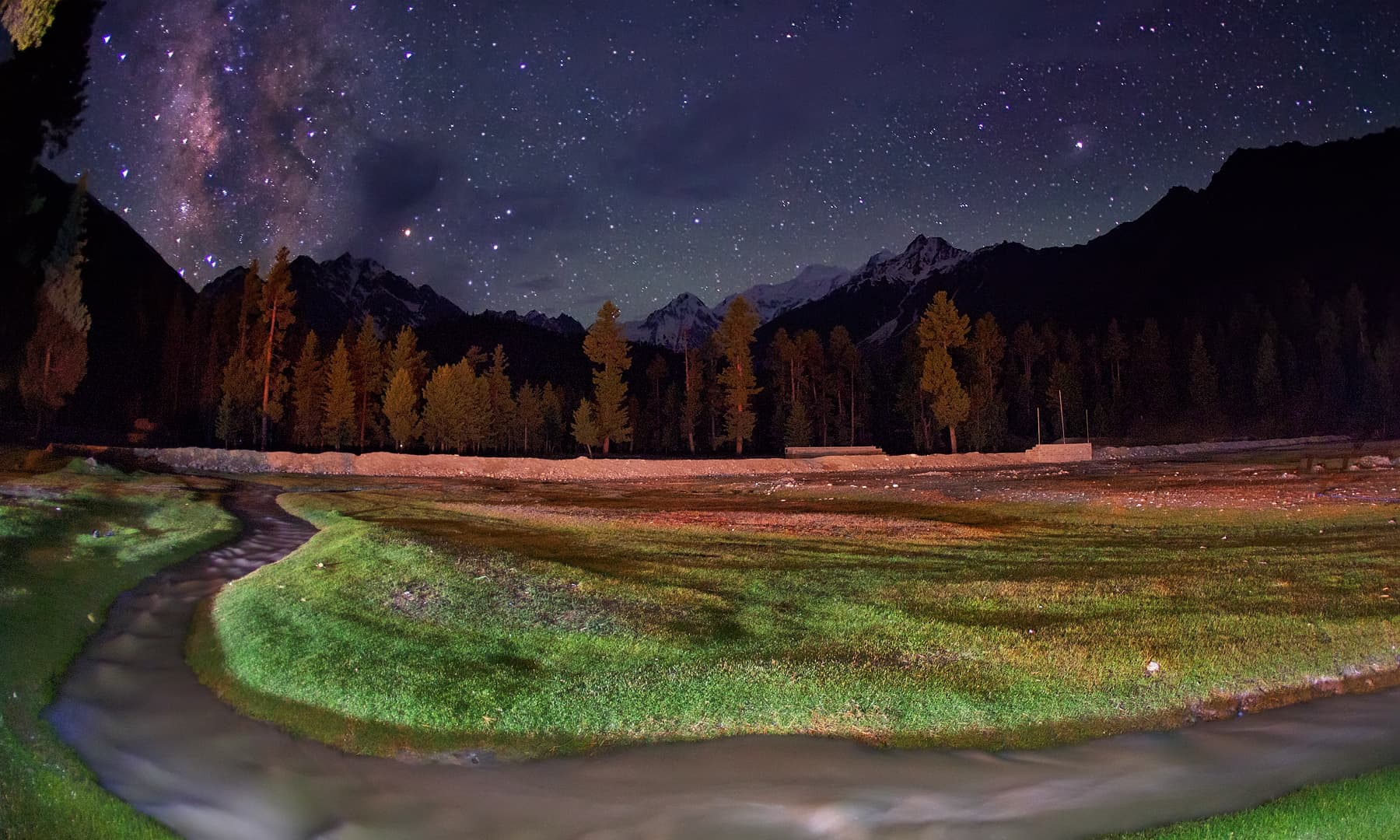 The real fun of the trip is in the embarrassment, but sometimes the traveler also gets very bored. There are two motels in Rama Meadow. One is PTDC, and the other is Forest Department Rest House. One night, I was sitting on the lawn in the Forest Department’s rest house, watching the setting sun. I saw a caravan of fairies descending on Rama’s field. Then, as soon as I saw it, the whole field turned into a campsite. A group from the Medical College Peshawar, comprising at least 200 women, began to spread throughout the field. When night fell, a problem arose. They built a campsite across the bridge but forgot to solve the washroom problem. PTDC had some army officers stationed there, so its entry was completely closed. Adjacent to my room in the rest house was the only washroom that ran through the room.

The group manager, a doctor and a wonderful man asked me for permission to use the washroom, and luckily I did. Then what happened, gangs of people started coming out of my room, and they kept coming and going till midnight. I sat outside in the cold, staring at myself. That night was stuck between the human beauty of Peshawar and the natural beauty of Rama.
The next morning, when there was a knock on my door, I realized the purpose. He packed his things and left, saying goodbye to Rama. It is possible that there was a hint of moisture in one eye on my leave, but on the other hand, there was happiness on the faces.