My next destination was Naltar Valley. A paved but narrow road runs along the river from Astor to the Karakoram Highway. The river is awesome, and so is the road. The Astor River flows into the Indus. Located at a distance of two and a half hours from Gilgit, Naltar Valley is famous for its colorful lakes, where the world’s best potatoes are also grown. Surrounded by pine forests, this valley seems to be a secluded and quiet place from the world. Time seems to stop still when you reach Naltar. The population consists of Gujars. Beyond the population are the colorful lakes of Naltar. Their water is so clear that the vegetables of the underworld are visible.
The color-changing lakes of Naltar are our national asset. These small lakes are green at the edges and blue at the center. The only stop point for a wanderer is probably a lake where he slows down for a moment and then walks away, but these lakes are so enchanted that the traveler finds it difficult to step up and says goodbye. Gets heavy
Sitting quietly by a lake in the remote wilderness is also a hobby. A feeling of complete loneliness. Whenever I sat on the shores of the lakes of Naltar, it was as if nature’s colorful crystal was spinning in front of my eyes, which dazzled my eyes, and I went into a state of consciousness. 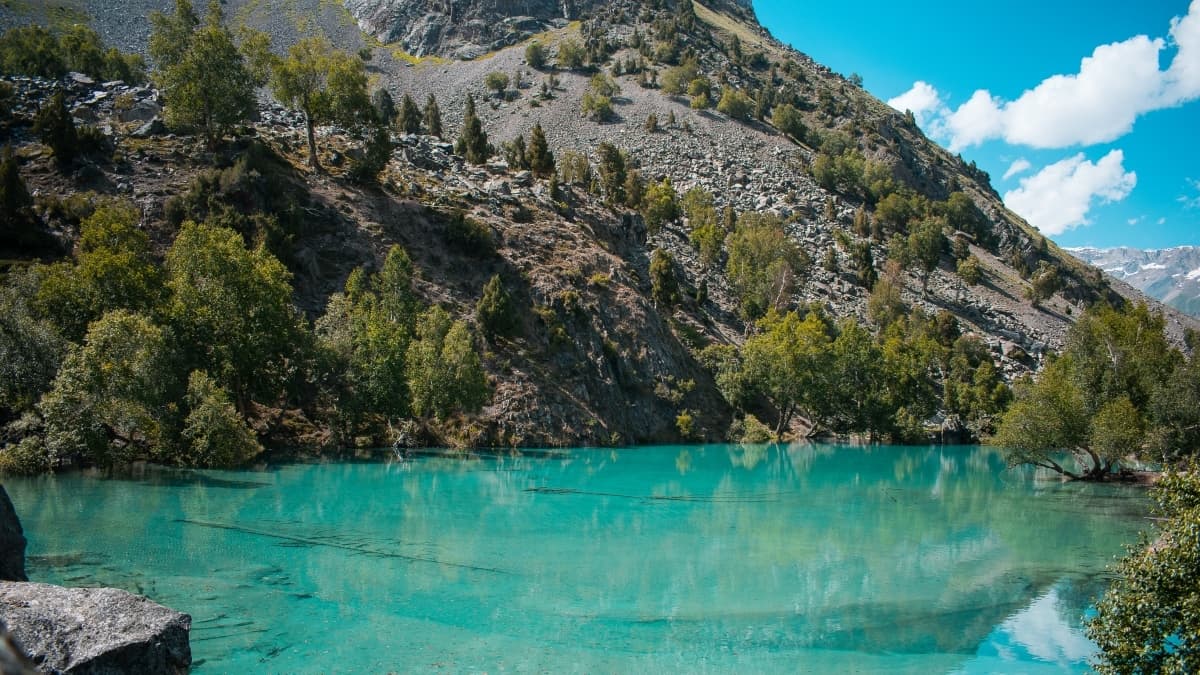 Telepathic lakes, a magical story, a masterpiece of an artist, under the influence of any human being began to speak to himself, everything began to vomit. A man sits still in a place like a patient with low blood pressure, and the listener also holds his hand in such a way that the effect of the Messiah is felt in the soul.
I am reminded of the days in April when the weary Hara reached the first lake after a long day of ice fighting. The snow of Naltar had not yet melted. As the heat of the sun began to rise, the snow softened, and feet sank in places. Sometimes the whole leg would sink, and he would have to work hard to free himself from the ice. Hard climbing, cold wind, dry lips, dry throat, just sitting in the lake tea where nature began to walk a series of telepathy.
Then the weather warmed up. The clouds began to surround the peaks first, and then the sky became cloudy as soon as we saw them. Climbing small valleys, walking up and down, sinking in the snow, when he came up from a slope, the scene opened up in front of him. There were snow-capped mountains and clouds. There were blue-green waters and autumn ripe trees. There were small rocky islands in the water, and small rocks of strange colors were shining on these islands.

When the scene opened from the slope to Faraz, then from Faraz to the shores of the water, the golden children of fish greeted. Trout had children or no one else. It is a pleasure to meet any creature other than rocks walking in the distance of the mountains. In the mountains, man’s ego disappears first of all, and the hand of power grips man.
Two years ago, my guide Karim shot a trout with a 12-bore rifle at the same place. The baby fish bubbled up on the shore and disappeared into the deep water. I felt like I had vented my anger. Naltar is a magical place, and this valley enchants man. Clouds surrounded the peaks. The raindrops fell from the sky as we walked along the water’s edge. These are the hours of accepting prayers when you feel that nature is with you. That is why I like distant valleys, that is why I go there because someone calls a man from the unmarked harem of Yazdan …! 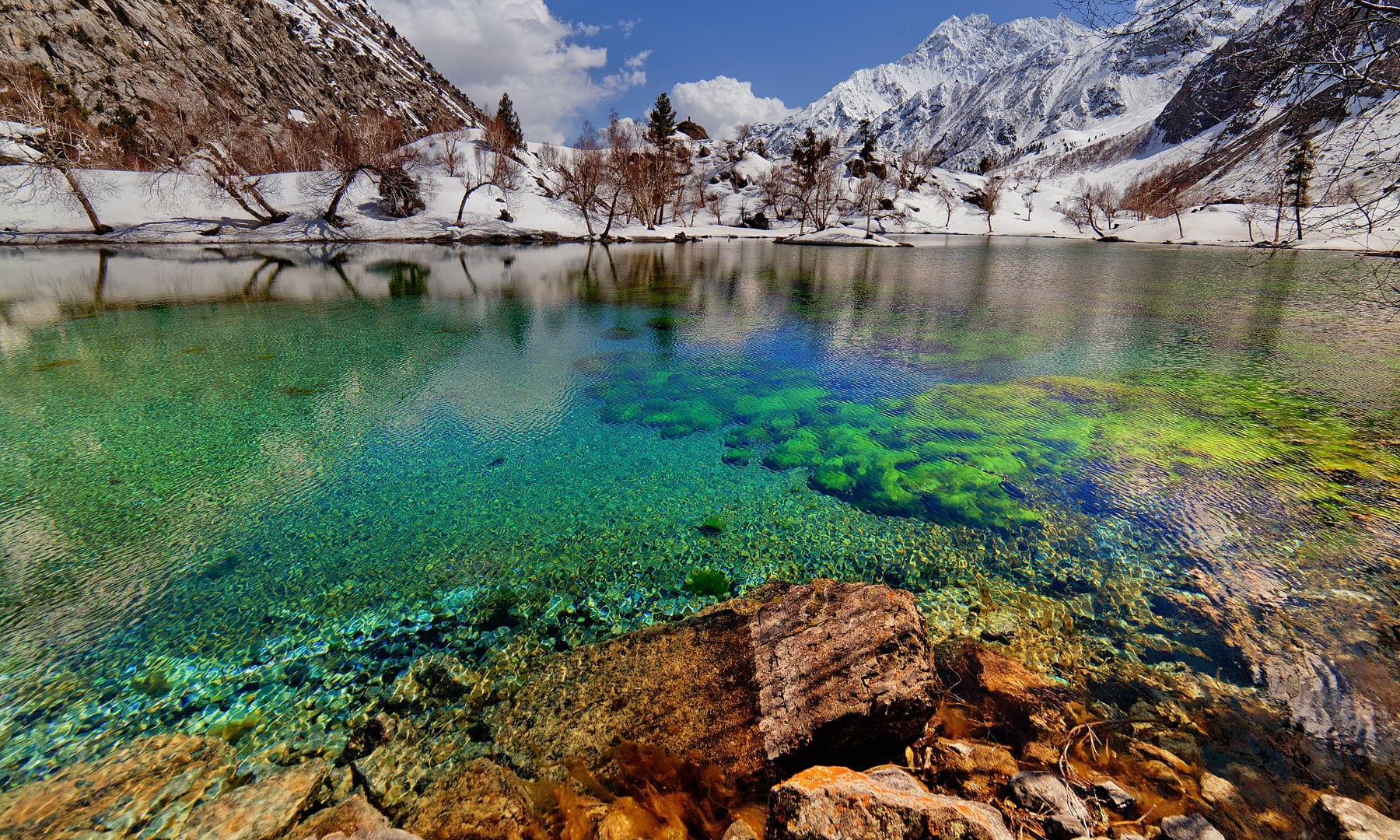 On that day, walking along the Naltar river, he picked up a few small round stones from its waters. There are still white stones on the cornice of my room. Milky white and wonderfully carved. These stones were soft on the first touch. Then they came home and became dry and rough. Seeing these stones reminds me of Naltar. That is why I have left them in front of my eyes. These rocks from the waters of Naltra are perfect in their natural carving. There were many brightly colored stones in the Naltar river, but I had never seen such a white color before, so I picked it up and collected it from the cold water.
Stones have never been a sign of love in the history of mankind, but only stones are written in the destiny of the insane, so they were considered a sign. In the north, if you want to see a valley of pure mountain life and tranquility like death, you must visit Naltar. There is a strange charm and distinct tranquility in this valley of Gujarat.

There is no special arrangement of memories. These are the children who have to be slapped first. When I started picking up the scattered memories from Rama to Naltar, many incidents came to my mind, but not everyone could make money because of the length. Anyway, what is the purpose of the traveler? All I know is that the starting point of human consciousness is a wonder, and the end is a wonder. Between this beginning and the end, age passes, seeking refuge in love and faith.