The most visited landmarks of Aceh

The Aceh is a semi-autonomous Indonesian province on the northwest tip of Sumatra Island. It’s known for beaches, diving sites, and mountain wilderness areas. Banda Aceh, its capital, is home to the 19th-century Baiturrahman Grand Mosque, a regional icon with delicate Mughal tracery, black domes, and a reflecting pool. Exhibits at the Aceh Tsunami Museum depict a 2004 natural disaster’s impact on the region.

The Indonesian state has established the Aceh Tsunami Museum. Documentation of one of the most severe disasters in the history of the world, which is the massive tsunami disaster that struck about 14 countries and resulted in the death of more than 300 thousand people, half of them from Indonesia only.

Inside the Aceh Tsunami Museum, you will live inside the details of that natural disaster through a set of stereoscopic paintings and interactive screens, which will scientifically explain to you how that disaster happened. You will find halls that show you the stories of survivors, how the media dealt with the disaster, as well as seeing the remains of people’s belongings, Which were carried by the tsunami. Another hall is dedicated to the names of those who died in that disaster, in which the Qur’an is read continuously. Another hall contains the flags of the countries that participated in relief, aid, and reconstruction.

The Great House of Rahman Mosque

You cannot travel to Sumatra without visiting the Great Bait-ur-Rahman Mosque or the Raya Bait-ur-Rahman, which is located in the heart of Banda Aceh, in the Indonesian province of Aceh. Wonderful.

Likewise, the disasters he faced throughout his history, and he came out lofty, the last of which was the tsunami, where all the houses and buildings surrounding it were destroyed, except that he was affected by little damage from outside, and that the experts attributed to him except the will of God Almighty first, then the strength of building materials The mosque is located in it; Therefore, the Bait-ur-Rahman Grand Mosque enjoys a great position in the hearts of Aceh, as it is a symbol of steadfastness for them.

Auli Beach offers a peaceful setting, with great mountain views on the horizon; So the beach is very popular with locals and tourists; Because it provides fun activities for families, such as taking a stroll along the beach, or doing barbecues, as well as enjoying the beauty of the beach and the surrounding area. 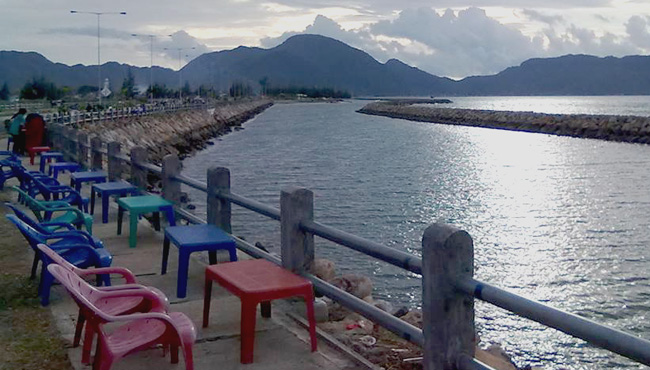 In Banda Aceh, there is Auli Beach, Hue, and the advantage of not being connected to the ocean directly. Therefore, we find that the waves are relatively calm. Thus it is considered safe for swimming or diving. Its black sand has healing powers. You just have to sit on a plastic chair and watch the most beautiful sunset at Ole Hugh Beach, which in itself is a wonderful experience.

Aceh has a number of tourist attractions that are understandably dedicated to the Tsunami, and another of them is the PLTD Apung, the name of a large ship located in Banda Aceh. When the Tsunami struck Aceh, it carried the ship to where it had been since then and is now preserved as a gift to those who died in the violent waters.

You can visit the boat or even climb the board and take in the views across the city from the deck of the ship.

This is an exciting attraction, and it also reminds in time of the power of the sea and is worth the trip alone to see this ship sitting in the middle of the city.